The origins of the Music Chapel rest on two strong personalities: Queen Elisabeth, a violinist keen to help young talents, and Eugène Ysaÿe, one of the greatest violinists and composers of his time. Both wanted to support emerging artists through a highly specialized school and an international competition. The competition has been renowned from the start and was to become the Queen Elisabeth Competition. The Music Chapel was inaugurated on 11 July 1939. It is famous for teaching exceptionally talented young musicians. At the time, the famous critic of the day, Emile Vuillermoz, described the Music Chapel as a sort of “modern Villa Medici.”

After the Second World War, the Music Chapel resumed its role as an educational institution in 1956. Up to 2004, it welcomed a dozen young musicians and composers in residence, each supervised by a professor of their choice, for three-year cycles. Several generations of elite musicians were to stay in the Music Chapel, occupying an eminent place onstage or in higher education.

Since 2004, the Chapel has run a more open and more flexible program of excellence for dozens of young musicians from around the world. Pretty quickly, the need
to adapt the accommodation and work infrastructure became an urgent matter

On that year, the Music Chapel undertook a thorough overhaul of its training and professional insertion program. The Music Chapel’s artistic training now rests on three pillars 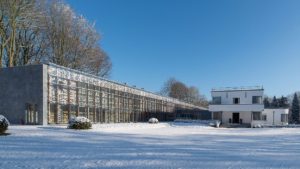 The inauguration in 2015 of a new wing – a success both architecturally and in terms of the surprising functional possibilities it offered  – has enabled the Chapel to work openly in its laboratory and to foster ongoing musical development.

This new approach has led to the reinforcement of the following lines: the transmission of knowledge, the joint presence on stage of the young artists and the masters, the “community” projects, and lastly the development of new media (live-streaming and recordings).

After the inauguration of the new building in January 2015, the Music Chapel opened a new chapter in its history by launching a season of public concerts in 2015–16. This first season comprised 60 concerts and gave the impetus for all the other activities of the Chapel that followed.

In 2019–20 the Music Chapel celebrates its 80th anniversary with lots of great projects & surprises to come! 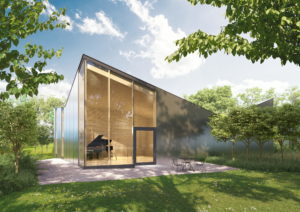 Extending the residence and the laboratory

In mid-2019, the Music Chapel will launch the festivities organized to mark its 80th anniversary. Since its opening on 11 July 1939, the Chapel has defined itself as a
center of musical excellence whose particularity is the residency of artists on its site.

The Music Chapel was moreover able to develop a program of public performances appreciated by an audience of tens of thousands of people each season and recognized by the different public authorities.

Almost five years after this historic step taken by the Chapel, the need for new extensions is once again on the agenda with regard to two distinct but complementary projects:

The development initiated by the Chapel of the pavilion-like residence and laboratory is planned within the coming two to three years (2021-2022).

The development of a new performance venue should take place over a longer period of time, concluding towards 2024-2025.

The desire of the Musical Chapel’s managers is to plan infrastructure developments that respect the identity of the project and its historic site and that also enable the institution to offer the best artistic program possible in order to be among the world’s leading centers of musical excellence.

As Queen Elisabeth had intended, “A showcase in the midst of nature” :
The Music Chapel is a center of musical excellence that supports musicians at the beginning of their careers.
Its facilities house young artists in residence in order to provide them with high-level training and prepare them for the stage. These campus activities take place in parallel to a performance activity and the hosting of different audiences within the Chapel.

The 1939 building designed by Yvan Renchon has become an icon far beyond its architectural qualities. Its image refers to the institution’s prestige and to music
in particular. This historic building has been listed since 1994 and is a symbol of excellence.

The 2015 extension of the Chapel, the de Launoit Wing, provided a complementary tool and adapted the original building. The extension enabled the development of the musicians’ working conditions and at the same time the opening of this magical universe to the outside world through the organization of a concert season (MuCH) and a range of activities. The extension was designed as a backdrop for the 1939 building. The
large glazed gallery plays with the reflection of nature and the staging of life on the inside. The design is sober, horizontal and strictly proportioned like an abstract
monolith. The reference that inspired us during its design was pure and enigmatic, like the monolith in 2001: A Space Odyssey. The glass façade is a smooth double
skin. It pays tribute to Eugène Ysaÿe by highlighting his pixelated score Harmonie du Soir. It transposes the rhythmic variations specific to the music and its writing into the transcription of the serigraphs and modules of the façade.

Looking toward the historical Chapel 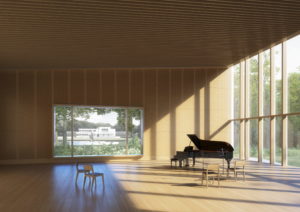 Following on the success of the artistic program, it has developed since 2015 and its ever-growing reputation, the Music Chapel now sees the need to continue the development of its campus. On a neighboring plot of land of 1.3 hectares, it wishes to develop the accommodation and workspace infrastructure. It proposes an alternative in the typology in the form of three pavilions that can accommodate between 4 and 8 musicians in nature and a rehearsal room to accommodate different types of projects, up to a large symphony orchestra.

The program is structured exclusively around a large room. It is a rehearsal room that can accommodate a large symphony orchestra and where rehearsals for opera productions can be prepared.