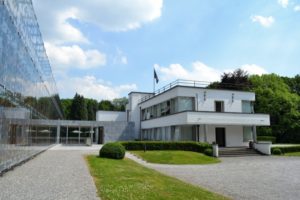 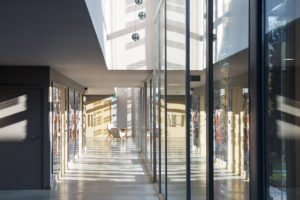 Seventy-five years after the opening of the Music Chapel, the de Launoit Wing was inaugurated in January 2015.

The building provides an outstanding infrastructure for our cultural and artistic activities. It includes 20 studios for students, in addition to two rehearsal studios and one concert hall. 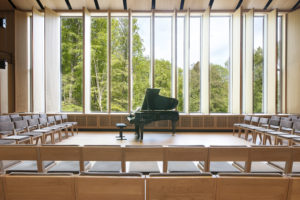 The project to expand the infrastructure was launched in 2006 with the choice of the architecture offices Synergy International and L’Escaut, experts in, among other things, cultural constructions and buildings with a high environmental value. The expansion was the object of a long reflection followed by a demand for a heritage certificate and lastly a building permit obtained in March 2013. These changes made it possible to continue the new dynamic launched in 2004, making it possible to offer to a greater number of musicians and their professors a residence adapted to the new project by providing, among others: 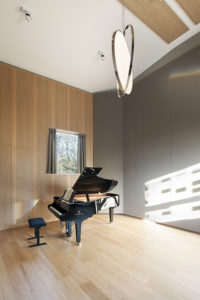 It is also important to underline the decision to complement the wonderful work of the architects with a thorough acoustic analysis conducted by Capri Acoustique (Rémi Raskin), with the restoration and improvement of the listed park by JNC and Jean-Noël Capart, with an efficient partnership with the contracting company AMART (CFE Group), and lastly with a remarkable interior design created for the artists and the audience by MBO (Michèle Buchter).

The de Launoit Wing has made it possible for all those involved to work in a spirit of knowledge transmission favorable to the development of each artist’s talent, rigor and sensitivity in order to help forge new generations of musicians. This has made it possible to keep pursuing the international development of the Music Chapel while remaining rooted in its Belgian environment.

Financing the new building was a considerable challenge, but the Chapel nevertheless pulled it off successfully! With a definitive budget of €10 million, the quality of the overall project, as well as the striking architecture of the new building, have convinced many public and private partners to support the Music Chapel in its development.

The official opening of the building, 75 years after the creation of the Queen Elisabeth Music Chapel, concluded a decade during which the Chapel’s project was thoroughly restructured, providing it with a tool that enabled it to pursue, in optimal conditions, its mission to transmit music to future generations. 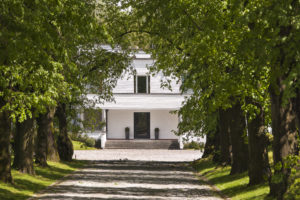 The Music Chapel building, a specimen of architecture in transition between Art Deco and modernism, was specially designed for its core activity: to welcome and house top-level young musicians and to give them the opportunity to improve and to perform on stage under optimal conditions. Realizing the vital importance of this architectural heritage for Belgium, the public authorities listed the original building and its park in 1994.