For several years now, the Chapelle Musicale has included in its missions a “Community” axis: a mission to meet our young musicians in residence and audiences who do not have immediate access to music. Indeed, by sharing their talent with patients in hospitals, people in great difficulty, migrants, people with disabilities, prisoners and prison guards, these young artists and the Chapelle Musicale participate in a social and cultural mission with these communities: all – musicians, teams and audiences – benefit from an extraordinary stage and life experience. The activity of community projects continues to grow both outside the Musical Chapel (more than 30 musical activities/year) and also in our concert hall in Waterloo, through the reception of these vulnerable audiences within the MuCH Season.

The “Community” axis is supported in particular by a chair of the Futur 21 Foundation and more generally by all the partners of the Chapel. We are extremely grateful to them for giving us the opportunity to do this work that complements our main and essential mission in today’s world.

A new social dimension was initiated at the Chapelle Musicale with the arrival of Maria Joao Pires in 2012 and the launch of the Equinox Choirs. The creation of a “Community Projects” chair in 2016 reinforced the Chapel’s desire to broaden the range of social applications offered to young talents from all disciplines taught there. This includes all the social and sustainable projects that the Chapelle Musicale integrates into its season, both on its Waterloo site and outside the walls in various musical projects for distribution and production.

Opening up to others, to other types of audiences and sharing one’s own talent is the goal of this “Community” axis.

The Community Chair already collaborates with some active projects, including the Equinox Choir Association and Singing Molenbeek. It invites vulnerable audiences during the Much season, such as the children of the Centre Comprendre et Parler or residents of Horizons Neufs. And it also produces a series of live projects by also offering a series of concerts in places such as Nativitas, Convivial, but also within the Cliniques Universitaires Saint-Luc, within the Cliniques de l’Europe (Sites of Sainte Elisabeth and Saint Michel), the prison of Ittre, the prison of Leuze-en-Hainaut, the Vignoble (home of the CPAS in Braine Lalleud), etc. 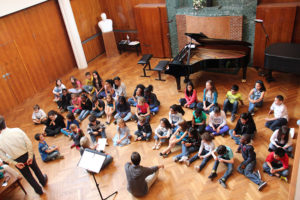 Founded in 2012, the non-profit organization Chorales Equinox is devoted to the creation, development and promotion of choirs composed of voices that on the face of it do not, or no longer, have access to quality musical training. It is a long-term, in-depth mission that aims to “root” musical practice in environments where the conditions are not right for it to flourish: it is a question of sharing art and culture, but also, quite simply, of equality. If we believe that music is a value that contributes to a certain quality of life, then we can only hope that it will be accessible to everyone, especially those who would not have had access to it without Equinox’s intervention.

Today, Equinox reaches a wide range of groups, including about a hundred children and convicts: children with a variety of disorders in a residential youth centre, young people with autism in a special school, children between the ages of 6 and 14 from an underprivileged neighborhood in Brussels, children living in one of the SOS Children’s Villages in Burundi, and prison inmates.

Julia, soprano: “I can only say good things about this experience. As a musician, I try to allow everyone to forget their daily problems and to break down differences in status. Realizing that we are all human connected by music is already a step. I felt it deeply during that concert. I look forward to participating in other initiatives of this kind. »

Fatoumata, Convivial spectator:” This was the first time I attended a classical music concert… I felt like in the movies, in the gardens of a beautiful castle...”

Mrs. P., revalidation patient: “Very good initiative carried out with a lot of kindness. You can feel that it is their passion. To be done again for patients. Much appreciated
by people with disabilities. It’s very generous and respectful. It brought back memories from the Queen Elisabeth Music Chapel in 1980. »
Mrs. U., a dialysis patient: “It moved me. The strong point was the proximity. Very pleasant and original… it brightens up our daily lives. To be done as soon as possible. »

P., prisoner of the Ittre prison: “Thank you. Sublime new discovery! I’d like to play another concert. »

Olivier Kina, Director of Ittre Prison: “A very enriching experience! A timeless moment of sharing with the detainees. It has been a long time since I have felt any sense in my
work outside of authority relationships and related enforcement issues. To be done again most certainly! Thank you. »

Fabien, tenor:” (…) Their reactions during our little concert were very enriching for us. If we were able to give them access to music that had not been discussed much so far, it was we who were the first to emerge from this beautiful moment of sharing: we had no idea what these children would perceive, how they would hear, or not hear. Some people got attached to the rhythm, others to a sound that they liked more than another, in the high-pitched or low-pitched, others still tried to retain the lyrics… but all spoke of the pleasure that the music brought to them and in turn, they went on stage and interpreted for us a song in sign language. Such moments are so precious that one can only hope to see them renewed very quickly. Thank you again! »

The “Community Chair” exists mainly through the Futur 21 Foundation and also through other foundations and partners.