To continue singing is essential for them!

After a magnificent concert by the Brussels Equinox choir in late August 2020 at the Music Chapel, all the choirs resumed their rehearsals with gusto! But that was without taking into account the various measures that would affect young people in the context of this pandemic. The team behind Equinox did all they could to ensure that each child could continue sing in groups that were sometimes quite small. Some choirs had to stop for a while, but almost all of them were able to resume their activities at an almost normal pace using the ‘bubble’ principle. For example, the Brussels choir, directed by Zeno Popescu, even launched into a new project and is currently rehearsing with great enthusiasm a new opera by Julien Joubert entitled “Aimez-vous Bach?” (Do you like Bach?). In order to continue working on the opera and to come together in a more cheerful context, Equinox plans to organize a workshop at the end of August in the Ardennes, in the middle of nature, far from the buzz of the big city. (Unable to meet the composer in person, the artistic team will organize a “video conference” with him to ask him all the children’s questions about his new opera.)

Ricardo Müller, a Brazilian choirmaster who has been based in Belgium since 2018, continues to rehearse every week in Louvain-la-Neuve with the young “Fantastiques” who suffer from various autistic disorders. Unable to perform on stage in December for their annual Christmas concert, the “Fantastiques” created a digital version of their performance that they were able to show to their families, friends, educators and teachers. This video was showcased on 25 March 2021 during the Handikap Festival, which was originally intended to allow the young people to perform on stage in Louvain-la-Neuve and to let young and old alike enjoy a wonderful, inclusive moment.

Augustin Bimenyimana, a choirmaster in Burundi at the SOS Children’s Village in Bujumbura, is continuing a musical comedy project with the 35 children who make up the choir. Augustin and Zeno remain in contact to supervise as best as possible all the children in the choir, especially the youngest who are still in kindergarten. 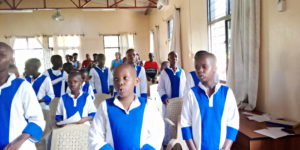 The partnership with the Queen Elisabeth Music Chapel is a guarantee of the quality of Equinox, and it is thanks to ad hoc partnerships with other institutions and organizations that Equinox achieves its objectives in the field, such as the Maison d’Enfants Reine Marie-Henriette, the specialized school Jean Bosco, SOS Children’s Villages, the Music Fund, the Athénée Royal Victor Horta, and the SRJ “Les Tilleuls”.

We will keep you informed in the coming months of the various projects of the Equinox choirs. All the choirs hope to be able to get back up on stage soon and to share with you these warm moments together that we miss so much!