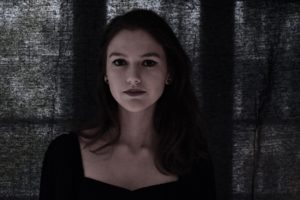 Born in September 2000, Elise Bertrand began her musical studies with the piano at the age of five and, in parallel, with the violin, at the age of eight. Three years later, she began to write her first compositions.

Elise is currently studying for a master’s degree in violin and composition at the CNSMDP (Paris Conservatoire). Since September 2022, she’s an Artist in residence at the Queen Elisabeth Music Chapel in the class of Augustin Dumay.

Since she was sixteen, Elise has been published by Billaudot and has received commissions from competitions, festivals, orchestras, and artists such as Renaud Capuçon, J.J Kantorow, etc.

She will soon record her first CD at Klarthe label around her works, in which she will play the violin as well as the piano.