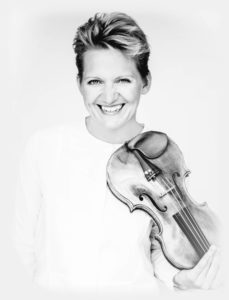 A native of Jurmala (Latvia), Vineta Sareika began her violin studies at the age of 5. She studied at the Conservatoire National Supérieur de Paris with Gérard Poulet and at the Queen Elisabeth Music College with Augustin Dumay. Sareika has attended the master classes of, among others, Ida Haendel, Ivry Gitlis, Zakhar Bron, Mauricio Fuks and Franz Helmerson.

Since becoming laureate of the Queen Elisabeth Competition in Brussels in 2009, Sareika has been invited to perform as a soloist by renowned orchestras such as the Belgian National Orchestra, London Philharmonia Orchestra, Royal Flemish Philharmonic and London Chamber Orchestra. She has worked with conductors such as Andris Nelsons, Paul Goodwin, Gilbert Varga and Gérard Korsten, and performs regularly in Europe, Asia, Australia and in the United States.

Vineta Sareika was a founding member of the Trio Dali, which has won several prizes in competitions in Osaka, New York, Vienna and Frankfurt. The recordings of Trio Dali devoted to Ravel and Schubert were highly acclaimed by critics. Together with her colleagues, Sareika has given master classes in Sydney and Melbourne, at Vanderbilt University in Nashville and the Royal Academy of Music in London.

In 2011, Sareika was appointed principal concertmaster of the Royal Flemish Philharmonic. She also appears regularly as guest concertmaster with orchestras in Belgium and has collaborated with conductors such as Riccardo Muti, Donald Runnicles, Kurt Masur, Jaap van Zweden and Hervé Niquet. Sareika plays an Antonio Stradivari violin (1683), generously on loan to her from the Ruggieri Foundation.
Vineta Sareika joined the Artemis Quartet in 2012, and she’s now a Master in residence in the section of chamber music at the Queen Elisabeth Music Chapel.