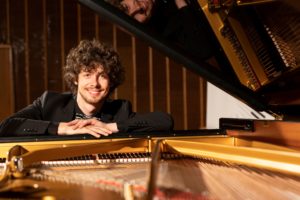 Valère Burnon is 22 years old and comes from Marche-en-Famenne (Belgium). He finished in June 2018 his bachelor’s degree at the Royal Conservatory of Liège where he studied with Marie-Paule Cornia, Jean Schils, François Thiry and Étienne Rappe. Then, he joined the Hochschule für Musik und Tanz Köln in Wuppertal in October 2019, first as an Erasmus student and then as a regular student with Prof. Dr. Florence Millet.

In 2021, he obtained his Master of Music with great distinction from the Hochschule für Musik und Tanz Köln. In September 2021, Valère was accepted to the prestigious Accademia Pianistica “Incontri col maestro” in Imola (Italy), which allows him to improve his skills with the Ukrainian pedagogue and pianist Leonid Margarius. At the same time, Valère was accepted in April 2022 at the prestigious Queen Elisabeth Music Chapel in Brussels, allowing him to benefit from the precious artistic advice of Frank Braley and Avedis Kouyoumdjian.

Thanks in particular to his first prize at the prestigious International Piano Competition of Épinal (France) in 2019 and the European Piano Competition of Bremen (Germany) in 2021, Valère has more and more the opportunity to express his talent on stage in the context of festivals and series of concerts in Belgium, France, Germany and Italy as well as on prestigious stages such as the Salle Philharmonique de Liège, the Historische Stadthalle in Wuppertal, the Aula Magna in Louvain-la-Neuve (Belgium), the Studio 4 in Flagey in Brussels, the Tonhalle in Düsseldorf, the Philharmonie of Cologne, etc.

He has also had the opportunity to play in the company of renowned orchestras such as the Liège Philharmonic Orchestra or the Metz Symphony Orchestra under the baton of Jacques Mercier.

In June 2020, Valère released his first CD in collaboration with Belgian pianist and composer Luc Baiwir; this album is dedicated to Claude Debussy, Sergei Prokofiev as well as Sergei Protopopov, an unknown Russian composer whose preludes op. 32 had never been registered. Valère released a second album in 2021, “Neoteric”, in duet with clarinettist Andreas Hermanski; this CD is dedicated to French composers Francis Poulenc, Ernest Chausson and Claude Debussy as well as Nordic composers Magnus Lindberg, Arvo Pärt and Rolf Martinsson.

Valère started playing music with the violin at the age of 6, and at the age of 7 he started playing the piano with Émilie Chenoy. She put him quickly in touch with Marie-Paule Cornia who followed him for about ten years and more particularly in the framework of the Conservatory of Huy and especially at the Royal Conservatory of Liège. Having completed his cycle of violin in academy with Valérie Cantella at the Conservatory of Ciney, Valère integrated as a violinist various orchestras, such as the Terra Nova Orchestra in Namur, under the direction of Étienne Rappe, or the Symphonic Orchestra of Students from Louvain-la-Neuve (OSEL), under the baton of Philippe Gérard, with whom he went on tour in Italy in 2017 as well as in Croatia and Slovenia in 2022.

Furthermore, in 2017 Valère created the Duo Ravello with the flutist Elodie Lambert, a graduate of the Royal Conservatory of Liège. Both musicians were silver medallists at the Luxemburg UGDA Competition and then notably performed at the Salle Philharmonique de Liège and at the Royal Juillet Musical Festival in Saint-Hubert (Belgium). In June 2019, they also took part of the Festival International de Musique de Belfort (FIMU) in France. Valère also performs regularly as a chamber musician, especially in duets but also in bigger ensembles like quintets, and was therefore appointed in 2022 lecturer in chamber music at the Royal Conservatory of Liège, allowing him to assist his former chamber music teacher Jean-Gabriel Raelet.

Valère benefits from a scholarship granted by Jean Praet Fund