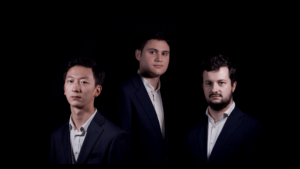 A Pantoum is a poetic form of Malaysian origin that arrived in France in the 19th century with the orientalist artistic movement, in which two ideas, one picturesque and descriptive, the other intimate and sentimental, are constantly intertwined.

This literary and artistic movement greatly influenced French music at the turn of the 20th century (so much so that the second movement of Ravel’s trio, entitled ‘Pantoum’, is directly inspired by its formal and thematic rules). In 2016, Hugo Meder (violin), Bo-Geun Park (cello) and Virgile Roche (piano) founded the Trio Pantoum while still in their first year at the Paris Conservatoire, and it has since established itself as one of the most promising European chamber music ensembles of its generation.

Rapidly developing an exceptional symbiosis both on and off stage, these brilliant young musicians pursued their shared passion for chamber music, seeking the ideal balance between cohesion and individual expression. Under the direction of Emmanuelle Bertrand and Michaël Hentz, they embarked on a thorough study of the chamber music repertoire for strings and piano, which they were fortunate enough to pursue in the prestigious master-classes of the Trio Wanderer at the Paris Conservatoire between 2018 and 2020, of Claire Désert and Ami Flammer (2019 to 2021), and of François Salque and Louis Rodde since 2021.

Hugo, Bogeun and Virgile have also received advice from many internationally renowned musicians such as Günter Pichler, Irvine Arditti, Marc Coppey, Alexis Galpérine, Emmanuel Strosser, Jérôme Pernoo, Jonas Vitaud, Xavier Gagnepain and Olivier Charlier, and have benefitted from advice from members of the Ébène, Modigliani and Diotima Quartets during masterclasses at the Paris conservatoire. Under the auspices of the ECMA (European Chamber Music Academy) programme, they have also worked with Hatto Beyerle (Alban Berg String Quartet), Johannes Meissl (Artis Quartet), Patrick Jüdt, Antonio Meneses (Beaux-Arts Trio) and members of the Talich and Škampa Quartets… In 2021, the trio became an Aspirant-Ensemble of the ECMA, which led to further training opportunities with the greatest European teachers, and to performance opportunities in some of the continent’s most prestigious venues.

The trio has performed at the Philharmonie de Paris (Grand Salle Pierre Boulez) and in many Parisian and French concert halls, but also at the Festival International de Piano de la Roque d’Anthéron as an ensemble in residence, in Norway as part of the Trondheim International Chamber Music Festival, in England in the auditorium of the Royal Northern College of Music in Manchester, in Switzerland in the Great Hall of the Hochschule der Künste Bern, in Germany, in Belgium… In January 2021, the trio was invited to perform live on French radio (“Générations France Musique: le live”).

The Trio Pantoum are Artists in Residence at the ProQuartet-European Chamber Music Centre for the 2021-2022 season.

In addition, Hugo, Bo-Geun and Virgile will be Artists in residence at the Queen Elisabeth Music Chapel (Belgium) from 2022-2023.

They are in residence at the Music Chapel since September 2022 under the guidance of Corina Belcea, Miguel da Silva & Jean-Claude Vinden Eynden.