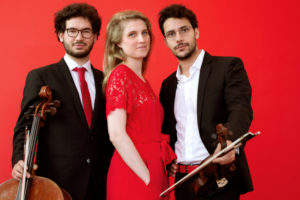 Founded in 2019 in Geneva, the Trio Ernest performs regularly in Switzerland and throughout Europe. Ensemble in residence at the Queen Elisabeth Music Chapel in the class of Miguel da Silva, Jean-Claude Vanden Eynden and the Artemis Quartet, it has already won six international prizes, including the Pro Musicis Prize (Paris), the first prize of the Verao Classico Chamber Music Award (Lisbon) or the Orpheus Competition (Zürich). The Trio has been a ProQuartet resident since October 2020. In June 2021 it joined the European Chamber Music Academy and work regularly with Patrick Jüdt.

The Trio also benefits from the advice of the Trio Wanderer and Claire Désert at the Académie Ravel and during the ProQuartet training sessions. It has been selected to participate in the Le Dimore Del Quartetto programme in Italy.

Clément and Stanislas are dressed by Alain Prudent (Tailleur.ch).