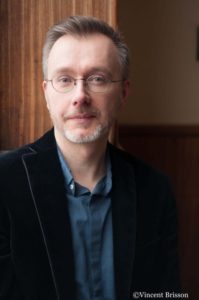 Philippe Riga is a pianist, harpsichordist and pianofortist.

He graduated from the Royal Conservatoire of Brussels and from the Lemmens Luca Institute of Leuven. He honed his skills under the guidance of such leading names as Christophe Rousset and Helmut Deutsch. He is a laureate of the Royaumont Foundation. He has participated in numerous concerts in Belgium and abroad, as a soloist and as the partner of many singers including José van Dam, Udo Reinemann, Veronica Cangemi, Hélène Guilmette and Jodie Devos.

He has collaborated regularly with the Festivals de Radio-France in Montpellier and the Aix-en-Provence Festival. He has also collaborated with the Royal Theatre of La Monnaie during musical events, and with the Anima Eterna Orchestra, conducted by Jos Van Immerseel, on pianoforte and harpsichord. In 2007 he recorded an album of French melodies by Irène Poldowski on an Erard piano with the soprano Elise Gäbele, and a disc of melodies by Gabriel Fauré with his first recital in Japan with the tenor Thibaut Lenaerts. He has accompanied numerous masterclasses given by, among others, Helmut Deutsch, June Anderson, José van Dam, Andreas Scholl, Tom Krause and Dietrich Henschel.

Since 2011 he has been the official pianist of the Queen Elisabeth Competition (Voice). He is currently a member of the faculty at the Queen Elisabeth Music Chapel as a pianist coach in the voice department under the tutelage of José van Dam & Sophie Koch, and a professor of piano accompaniment at the Royal Conservatoire of Brussels.