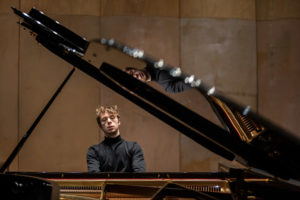 Winner of the “Premio Concerti a Teatro” of Carispezia Foundation, and of the “Palma d’Oro” International Piano Competition in Finale Ligure, he obtained prizes in more than 30 International piano competitions. He records CD’s for International labels Naxos Records and Grand Piano.

He promotes the rediscovery of 20th century Italian music, in 2022 he is recording the complete piano works of Luciano Berio, and attending recordings in Rome with Roma 3 Orchestra ensemble with Lorenzo Perosi chamber music.

In 2021 he attended a national tour with Roma 3 Orchestra ensemble (between Lazio, Abruzzo, Molise and Lombardia), with music by Perosi, Wolf Ferrari and Wagner.

He is the promoter of Giuseppe Molinari piano works, Friulian composer and his fellow citzen, who tragically died in 2006, and of which he created a multidisciplinary show between music and dance, which made its debut at the Mittelfest Festival (Turn Off Subtitles – ovvero Ode a Giuseppe Molinari).

In parallel to the intense concert and recording activity, Matteo Bevilacqua dedicates himself to the research and development of multidisciplinary/intersectoral projects, which place music in relation to other arts, scientific disciplines and new technologies.

Since September 2022, Matteo is an Artist in residence at the Music Chapel, under the guidance of Frank Braley and Avedis Kouyoumdjian.