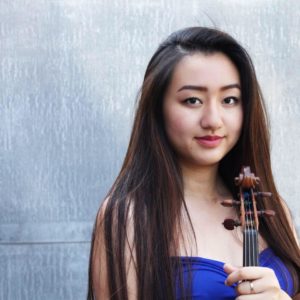 1st prize winner of the Lipizer International Violin Competition, violinist Karen Su (1998) was the featured soloist in the Gergiev Festival.

Born in Los Angeles (USA) into a musical family, with both her father and older sister being violinists, Karen began studying the violin at age 4 with her father Elmer Su. Soon after she started studying with Vesna Gruppman, and later continued simultaneously with Igor Gruppman. When she was 15, Karen moved to The Netherlands to pursue her studies and graduated from her Master’s degree when she was 21.

Karen has appeared as a soloist with orchestras in North America, Europe, and Asia. She is regularly invited to perform with Maestro Roberto Beltran-Zavala, appearing in prestigious halls in Mexico. In 2019 Karen gave the European premiere of Florence Price’s rediscovered 2nd violin concerto with Maestro Conrad van Alphen.

Karen has caught the attention of many scholarships and grant programs. She was awarded the Hartman Award, Prins Bernhard Funds Award, Belgian American Educational Foundation Award, and was named as a candidate for the Borletti Buitoni Trust Award.

In addition to solo playing, Karen is an active and passionate chamber musician and works with musicians such as Augustin Dumay, Gary Hoffman, Jean-Claude Vanden Eynden, and Lorenzo Gatto.

She is currently an artist in residence at the Queen Elisabeth Music Chapel in Waterloo.