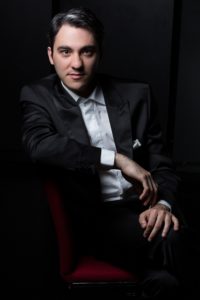 Alexander Gadjiev has studied almost ten years with his father Siavush Gadjiev, former professor of Central Music School of Moscow, in his hometown.

Since Fall 2013 he is studying with Pavel Gililov at Universität Mozarteum in Salzburg.

His prizes include Premio Nazionale delle Arti in 2012, 3rd Prize at FVG International Piano Competition and Premio Venezia 2013, which gave him the possibility to perform all over Italy and to play with La Fenice Orchestra at La Fenice Opera House with Yuri Temirkanov.

Since September 2021, he is an associate artist in residence at the Queen Elisabeth Music Chapel, in the class of Louis Lortie.