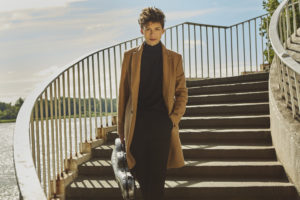 He is the recipient of scholarships from the Minister of Culture and National Heritage, the J. Semkow Foundation, the National Children’s Fund, the President of the City of Gdańsk, Marshal Office of Pomorskie Voivodeship, Rotary Club Gdańsk-Sopot-Gdynia.

He began learning to play the violin at the age of eight in Gdańsk. After graduating from the
S. Suzuki School of Music in the class of Anna Podhajska, he continued his education at the
Z. Brzewski Music School in Warsaw under the supervision of Prof. Magdalena Szczepanowska. He was also educated under the supervision of Prof. Yair Kless in Buchmann-Mehta School of Music in Tel-Aviv and Scuola di Musica di Fiesole in Italy.

He is currently studying at the Fryderyk Chopin University of Music in Warsaw under the supervision of Prof. Agata Szymczewska, and at the Queen Elisabeth Music Chapel under the direction of Augustin Dumay.