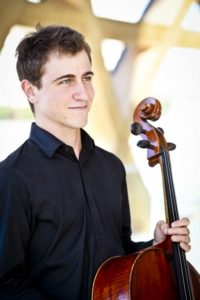 Maxime Quennesson started learning the cello at the age of 6. In 2011, he entered the CRR of Paris in the class of Hélène Dautry before entering the class of Michel Strauss and Guillaume Paoletti at the CNSM of Paris in 2014. In 2019, he obtained his master’s degree “mention très bien avec les félicitations du jury”. He regularly appears in the media such as France Musique, Radio Classique, The Violin Channel, … In December 2020, he was one of the five finalists selected among more than 130 participants from all over the world, at the Barbash Bach Competition, and won the 1st prize. He has also won numerous international competitions, including Louis Rosoor, Edmond Baert, FNAPEC, PMC, Flame, Bellan… He has performed as a soloist, with orchestra (Ensemble Appassionato, Orchestre du Concert de la Loge, OCUP, Stuttgart Kammerorchester, Orchestre Royal de Chambre de Wallonie) and in recital (Festival Radio France Montpellier-Occitanie, Amsterdam Cello Biennale …). He joined the Académie Jaroussky for the 2018-2019 season, and was artist-in-residence (with his trio) at the 2019 La Roque d’Anthéron International Piano Festival. Founding member of Trio Zeliha (piano trio), a recording for the Mirare label has just been released in November 2020, and is supported by great personalities such as Menahem Pressler , Trio Wanderer, Quatuor Ebène …  The renowned pianist Menahem Pressler has described the playing of Quennesson and his Trio Zeliha as “exceptional not only for its exquisite musicality, but also for its total commitment and technical qualities”. Maxime has benefited from the advice of masters such as Nicolas Altstaedt, David Geringas, Eckart Runge, Clive Greensmith, Emmanuelle Bertrand, Bruno Cocset, Ophélie Gaillard, Gary Hoffmann and Philippe Muller.

He is also very involved in contemporary creation, in 2020, the French composer Jacques Lenot dedicated two works to him, the first, a piece with piano, and a second, for cello and 25 musicians, “Des Anges & des Dieux”.

Maxime plays on a cello made by Jean-Baptiste Vuillaume (1863), generously lent by Bruno Delepelaire, and is supported by SAFRAN, ADAMI and Or du Rhin.

Since September 2019, he is Artist in Residence at the Queen Elisabeth Music Chapel under the direction of Gary Hoffman, and will pursue a postgraduate degree (DAI) at the CNSMDP.