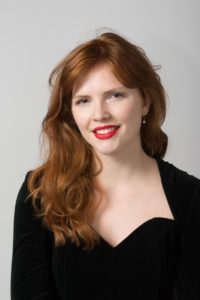 Born in Mons (Belgium) in 1996, Louise Foor decided at the age of 6 to study piano at the Académie de musique de Mons.

At the age of 12 she discovered her passion for singing and began vocal training with the countertenor Johan Trenti. In 2014 she enrolled at the Institut supérieur de musique et de pédagogie in Namur where she embarked on singing lessons, among others with Ana-Camelia Stefanescu and Elise Gäbele.

The winner of the international competition Triomphe de l’art in Brussels in 2016, she met the opera singer Anna Samuil, who became her teacher at the Hochschule für Musik Hanns Eisler in Berlin.

In 2017 she won the “best young performer” prize at the Hariclea Darclee International Competition in Romania. In 2018 she took part in a series of other international competitions in Germany (Immling), Austria (Graz) and Italy (Portofino), where she won numerous prizes.

In 2019 she was awarded second prize at the Concours international d’art lyrique de Namur.

In 2020 she will have the pleasure of making her debut at the Opéra Royal de Wallonie in Liège in several productions and of becoming one of the MM Laureates of La Monnaie in Brussels.

Since September 2020, she is an Artist in Residence at the Queen Elisabeth Music Chapel, under the direction of José van Dam and Sophie Koch.