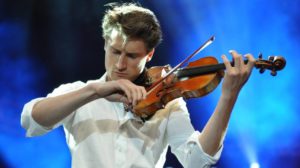 Lorenzo Gatto was born in Brussels in December 1986. He started playing the violin at the age of five with Dirk van de Moortel. At eleven years old, he enters the Brussels Royal Conservatoire of Music in the class of Veronique Bogaerts, where he graduates at seventeen only with the highest honor.

He then studied with Herman Krebbers in the Netherlands, Augustin Dumay at the Queen Elisabeth Music Chapel in Belgium and he finishes his academic journey by studying four years with Boris Kuschnir in Vienna. His work and determination are brilliantly rewarded as he won both the Second Prize and the Public’s Prize at the Queen Elisabeth Competition in 2009.

‘Above all, I want to sound honest. There is fragility in my tone, it is a reflection of who I am as a person. That is what music is to me: an expression of human fragility.’

His nomination as a ‘Rising Star’ in 2010 allows Lorenzo to make his recital debut on major European stages including the Amsterdam Concertgebouw, the Vienna Musikverein, the Cité de la Musique in Paris and many others. It further expanded the possibilities of collaboration with orchestras and conductors such as Philippe Herreweghe, Vladimir Spivakov, Walter Weller, Jan Willem de Vriend, Jaap van Zweden, Martin Sieghart, Angrey Boreyko and Yannick Nézet-Séguin.

In chamber music, Lorenzo shared the stage with amongst others Maria João Pires, Mischa Maisky, Martha Argerich, Menahem Pressler, Jean-Claude Vanden Eynden, Frank Braley and Gérard Caussé. Recently, Lorenzo started collaborating with the talented young Belgian pianist Julien Libeer. Together, they recorded several Beethoven sonatas and released a disc that has already been awarded a Diapason d’Or of the year.

In his spare time, Lorenzo enjoys a lifelong passion for everything that flies. Look up and see if you can spot him high in the sky, arriving at a concert flying a small plane or even a paraglider.