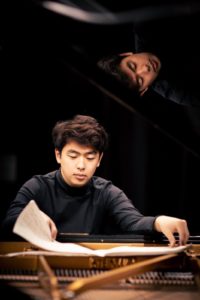 He started playing the violin with his brother but quickly turned to the piano, and entered the Bordeaux Regional Conservatory in 2006 in the class of Marie-Christine Dubernat.

In 2008, he is admitted to the CRR of Paris in the class of Anne-Lise Gastaldi and obtains, at the age of thirteen, his piano prize with honors unanimously with the congratulations of the jury.       He then entered the Conservatoire National Conservatoire National Supérieur de Musique et de Danse (CNSMD) in Paris in the class of Hortense Cartier-Bresson where he obtained his bachelor’s degree with honors.

He then follows his master in the class of Florent Boffard and graduates, in June 2019.

He has already performed in many venues in Paris, in 2010 at the Salle Pleyel on the occasion of bicentenary of Chopin, in 2013 at the Châtelet theater for a charity concert « Tous en cœur ». He also participated in the Chopin festival in Nohant (summer 2017), in the Nohant Hors les Murs festival (December 2017), the festival of the Orangerie de Sceaux (September 2018), as well as at the Musiques au Pays de Gabriel Fauré festival (September 2019).

He shares the stage with great artists such as Nicholas Angelich, Jean-Efflam Bavouzet,

He is at the origin of the Trio Consonance with Ryo Kojima (violin) and Jérémy Garbarg (cello), supported by the Fondation Banque Populaire and the Fondation Safran.             They have already performed on stage notably in Norway during the Trondheim Kammermusik Festival.

In October 2018, he won the first prize in the Gabriel Fauré International Competition.

He also won the first prize of the International Competition of the Società Umanitaria in Milan, Italy with the Duo Consonance formed with Jeremy Garbarg.

He recently participated in the performances of the Centre de Musique de Chambre de Paris at the Salle Cortot and he is regularly invited to the Folles Journées de Nantes and to those from Tokyo.

In August 2020, he participates in the 40th edition of the Piano Festival of La Roque d’Anthéron in the context of the complete 32 piano sonatas of Beethoven.

He is since September 2021 an artist in residence in the piano section of the Queen Elisabeth Music Chapel in Waterloo, under the guidance of Louis Lortie and piano accompanist for the Viola section.