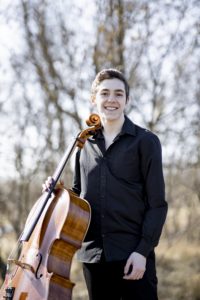 Born in 2000, João Pedro Gonçalves started playing the cello at the age of 12 with Ana Cláudia Serrão as his mentor, in Lisbon, continuing later with Marco Pereira and Paulo Gaio Lima.

In recent years, he has had the opportunity to work with several professors, such as Daniel Muller-Schott, Gary Hoffman, Jakob Koranyi, Kyril Zlotnikov, Marc Coppey and Maria de Macedo and has had the chance to work with many of the world’s leading conductors, including Lorenzo Viotti, Gustavo Dudamel and Giancarlo Guerrero.

João is a first prize winner of such competitions as Concurso Capela (2016), Concurso Nacional de Cordas Vasco Barbosa (2017), Prémio Fundação Inatel (2019) and most recently Prémio Jovens Músicos (2021, over 18 category), where he received the award Maestro Silva Pereira – Young Musician of the Year 2020/21.

Currently studying with Jeroen Reuling at the Royal Conservatory of Brussels, he plays on a cello made by Tanguy Fraval on loan from Strings For Talent and the King Baudouin Foundation, in memory of Bonno H. Hylkema.

In September 2022, he will start as an Artist in residence at the Queen Elisabeth Music Chapel under the guidance of Gary Hoffman and Jeroen Reuling.

Joao benefits from a scholarship from an anonymous donor