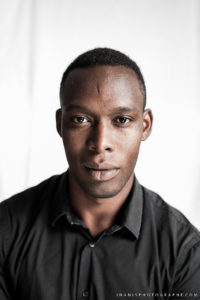 After graduating in mechanical-aeronautical engineering, management and finance, and after working as an engineer and as an investment banker, Halidou Nombre decided to devote himself full-time to his passion: the stage.

In parallel to his studies, he took his first steps on stage in the field of musical theatre before joining a soul band that performed Motown classics. During his studies, his interest in dance led him to join the contemporary dance company of the Sorbonne under the direction of Corinne Virmont.

The fortunes of life led him towards the opera repertoire, which imposed itself as a revelation. He then began his training in Saint-Ouen with Frédérique Epin, before perfecting his skills with Pierre Catala and Guillemette Laurens. The holder of a Diplôme d’Études Musicales from the CRR Paris, Halidou Nombre pursued the training for concert performers of this same conservatory at the end of 2018 in the class of Elsa Maurus, graduating in 2020. He took part in numerous masterclasses, including one dedicated to the roles of Don Giovanni and the Count in Mozart’s Marriage of Figaro with Maestro Ruggero Raimondi.

A true lover of the stage, Halidou Nombre has distinguished himself in many roles since his beginnings, whether in opera and operetta, but also chamber music and lied, which he has approached with Jean-Marc Pont Marchesi, with whom he performs in recital. He has also tried his hand at directing, putting on a production of Dido and Aeneas at the Hôtel Gouthière in Paris. Among the roles he has performed are Escamillo in Bizet’s Carmen at the Théâtre Royal de Mons in 2020, Golaud in Debussy’s Pelléas et Mélisande, Mercutio in Gounod’s Roméo et Juliette in 2018, the Drunken poet and Hymen in Purcell’s The Fairy Queen, Grabuge in Offenbach’s Geneviève de Brabant, as well as René in Maurice Yvain’s Elle est à vous in 2017, the Marquis de la force in Poulenc’s Le dialogue des carmélites in 2016, Leoporello in Mozart’s Don Giovanni, and Geronimo in Cimarosa’s Il matrimonio segreto in 2015.

In 2019 he participated in the creation of Jungle, a contemporary opera inspired by Rudyard Kipling’s book, at the opera houses of Limoges, Bordeaux and Tours. During the 2020/2021 season he toured with Les Frivolités Parisiennes, performing the roles of Victor in Paul Miraski’s Normandie and of Jupiter in Rameau’s Platée directed by Stéphane Delbassé, and he will also appear in a revival of Jungle at the operas of Tour and of Massy. He will also be at the Festival of Aix-en-Provence in June 2021 in the context of its academy (Opéra de-ci de-là). He has also been invited to the Brussels Mozartiades for a concert based on the Da Ponte trilogy.

Since September 2020, he is an Artist in Residence at the Queen Elisabeth Music Chapel, where he studies with José van Dam and Sophie Koch.

Halidou benefits from a scholarship granted by an anonymous donor