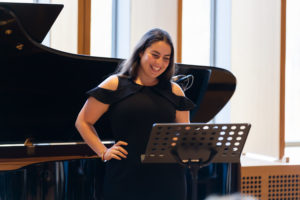 Graciela Morales began her musical studies at the age of 15 under the guidance of Emily Israel in Cuernavaca, Mor. She then continued her professional training at the Escuela Superior de Música del INBA from 2011 to 2015 with Amelia Sierra.

She has participated in the a capella ensemble “Gradus ad Parnassum” and the Coro de Madrigalistas de Bellas Artes. Graciela has performed in the great halls of Mexico under the baton of important conductors such as Arthur Fagen, Enrique Patrón de Rueda, Christian Gohmer, Xavier Ribes and James Damster.

Recent performances include Susana in Mozart’s La Nozze di Figaro, Teresa in Francis Poulenc’s Les Mamelles de Tirésias, Morgana in G.F. Handel’s Alcina, Lucia in Benjamin Britten’s The Rape of Lucretia, Pamina in The Magic Flute and Rosina in W.A. Mozart’s La Finta Semplice, among others.
In 2020, she made her international debut at the renowned Mozartwoche Festival in Salzburg under the baton of tenor Rolando Villazón.

She was also a member of the Opera Management Alma in Paris, where she studied with Maestro Raphaël Sikorski.

Since September 2021, Graciela is an Artist in residence at the Queen Elisabeth Music Chapel in the class of José van Dam and Sophie Koch.

Graciela benefits from a scholarship granted by the Baillet Latour Fund