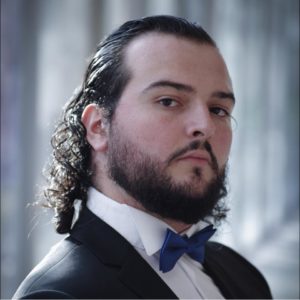 French tenor François Pardailhé is originally from Lyons. He grew up in Toulouse where he studied French horn before turning to opera singing. After graduating from the Toulouse Conservatoire, he was admitted to the International Academy for French Music Michel Plasson in the summer 2016 opera session. He started working with Didier Laclau-Barrère in early September 2016. He is currently artist in residence in the voice section under the direction of José Van Dam and Sophie Koch at the Queen Elisabeth Music Chapel in Waterloo, Belgium.

He has performed as a soloist in numerous ensembles and opera houses, among them the Capitole de Toulouse, the Bordeaux Opera, the Royal Opera of Versailles and Liège, La Monnaie in Brussels, the Sacqueboutiers de Toulouse, the Toulouse Baroque Chamber Orchestra, the Archipels-les Éléments choir, Les Passions, the Mozart Orchestra, the orchestra Les Musiciens du Louvre, Le Concert Spirituel and the ensemble À bout de souffle.

Since the beginning of his career, he has performed at the 2017 Colmar International Festival. In the spring of 2017, he was a finalist in the International Marseilles Competition. In early 2018, he was a national semi-finalist in Massy during the “Voix Nouvelles 2018” competition organized by the CFPL. In May 2018 he made his debut in Salzburg during the 2018 Whitsun Festival in Jacques Offenbach’s La Périchole with Les Musiciens du Louvre conducted by Marc Minkowski. In June 2018 he won second prize at the International Singing Competition in Lavaur. Still with Les Musiciens du Louvre, he was soloist in Mozart’s Mass in C and Handel’s Ode for St Cecilia’s Day on a European tour in December 2018. In early 2019 he was Oloferno Vitellozzo in the opera Lucrezia Borgia during the 2018–19 season of the Théâtre du Capitole de Toulouse. In March 2019 he performed Spoletta in Puccini’s opera Tosca conducted by Emmanuel Plasson. In September 2019 and November 2021 he was Guillot and Charles in the opera Richard cœur de lion by André Grétry with Le Concert Spirituel conducted by Hervé Niquet at the Royal Opera of Versailles. In December 2019 he was again at the Royal Opera of Versailles for the revival of La Périchole with Les Musiciens du Louvre conducted by Marc Minkowski. In March 2020 he was Benvolio in Gounod’s opera Roméo et Juliette at the Grand Théâtre de Bordeaux with the ONBA conducted by Paul Daniel. In October 2020 he was Gérald in the show L’histoire enchantée de Lakmé at the Opéra Royal de Wallonie-Liège. He will sing the teapot, the little old man and the frog in Ravel’s L’Enfant et les sortilèges under the direction of Emmanuel Plasson at Poilhès. In August and September, he will be Jupin in La péniche Offenbach directed by Charlotte Nessi on tour in Franche-Comté and the Canal du Midi.

In March 2022 he will perform Castor in Rameau’s Castor et Pollux at Odyssud with the ensemble À bout de souffle directed by Stéphane Delincak and staged by Patrick Abejean. In June 2022 he will be the chaplain in Poulenc’s Dialogues des Carmélites directed by Michel Plasson.