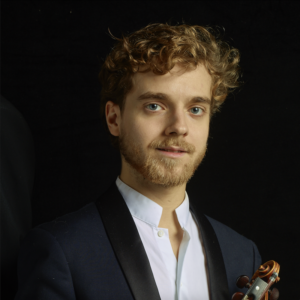 Born in 1999 in Paris, Emmanuel Coppey began playing the violin at the age of four. He entered the Paris Conservatory at age 14, where he studied with Svetlin Roussev and Philippe Graffin, and graduated with a Master’s degree in 2019.

He is a laureate of the Plock, Sofia and Rotary competitions, received, as a chamber musician, the Grand Prix of the Ravel Academy and participated in several youth orchestras as a Concertmaster (VFJO, IOIA, RAM and CNSM).

He has received the support of Adami and the Fondation pour la Vocation, and is a scholarship holder of the Royal Academy, which supports him notably by lending him a magnificent violin by Giovanni Francesco Pressenda.

In addition, through the Concerts de Poche and PYMS Médiation, he participates in numerous cultural mediation concerts to try to bring classical music to places where it is less accessible.

His plans for 2021 included a concert in Bach’s Concerto in A minor conducted by Rachel Podger in London, a final recital at the Royal Academy around Beethoven, Bartók and a contemporary creation by Emre Şener inspired by Chekhov’s Seagull, as well as a complete Bach Sonatas and Partitas and Beethoven Sonatas.

He is now perfecting his musical education with György Pauk at the Royal Academy of Music in London and at the Queen Elisabeth Music Chapel, where he is an artist in residence since September 2021, in the class of Augustin Dumay.