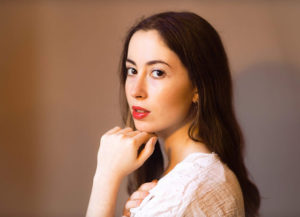 Winner of numerous international competitions, Israeli soprano and cellist Elia Cohen Weissert discovered her voice and passion for the Opera in a singing class during her cello studies.

In 2018 Elia started a Bachelor’s degree in Opera singing at the Brussels Conservatory and She is currently doing a masters degree in the HMT Rostock in the class of Fionnuala McCarthy.

Since October 2022 Elia is an artist in residence at the Chapelle Musicale Reine Elisabeth in Belgium, where she is studying with José van Dam and Sophie Koch (where she also studied as a Cellist from 2017-2021 with Gary Hoffman).

She is also taking lessons with Stéphanie d’Oustrac and Malcolm Walker in Paris and with Janet Williams in Berlin. In July 2020 Elia won the Grand Prix at the Lotte Lehman Vocal Academy in Perleberg, which encouraged her to pursue a singing career.

Her voice is so exceptional that she convinced not only the jury, but also the audience can feel that they have just experienced an extraordinary performance: with the aria “Quel guardo” from Donizetti’s Don Pasquale, Elia shows a stage presence that Racitti praises.

She is the winner of this year’s Lotte Lehman Academy.“ Hanno Taufenbach, Lokales aus der Prignitz. Elia performed the role of Michaela in G. Bizet’s Carmen during the festival Éole en musique in Nantes and in October 2022 she will perform the role of Adina In Donizetti’s L’elisir d’amore in HMT Rostock.