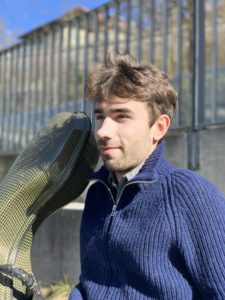 Born in 1996, Antonin Musset began playing the cello at the age of seven with the French pedagogue Alexandre Lacour.

He graduated from the Bern University of the Arts where he studied for five years with Antonio Meneses.

In 2018, he received a special prize at the XI Witold Lutosławski International Cello Competition for his performance of Chopin’s Cello Sonata. Antonin was invited by the Fryderyk Chopin Institute to perform at the 2018 Chopin and His Europe festival in Warsaw.

In recent years he has been invited to participate in some of the most prestigious academies in Europe : in 2019, has is at the Verbier Festival Academy, and in 2021 he participates in the Seiji Ozawa International Academy.

Since September 2021, he studies at the Queen Elisabeth Music Chapel as Artist in Residence under the direction of Gary Hoffman.

Antonin benefits from a scholarship granted by an anonymous donor