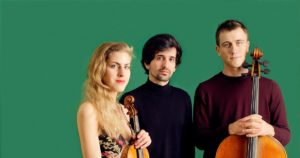 Trio Zeliha was formed in 2018, the result of the artistic complicity between violinist Manon Galy, cellist Maxime Quennesson and pianist Jorge Gonzalez Buajasan. In 2019 the trio was a winner at the FNAPEC competition and the following year they won the first Luigi Boccherini Prize at the Virtuoso & Belcanto International Competition (Italy). In 2021 Jorge Gonzalez Buajasan and Manon Galy jointly won the 1st Prize, the Audience Prize, the Sacem Prize, the Belle Saison Prize, the Bullukian Foundation Prize as well as the Prix des Collégiens at the Lyons International Chamber Music Competition.

The Trio Zeliha recorded its first CD for Mirare with a program dedicated to the early trios of Mendelssohn, Arensky and Shostakovich. Released in November 2020, it was praised by Alfred Brendel and Menahem Pressler; the latter called it “an exceptional recording, not only for its exquisite musicality but also for the technical qualities of each of them. It is heartwarming to hear such a young group achieve such musical depth; with them it is obvious that the music comes first.” In January 2021, the album was voted “Editor’s Choice January 2021” by Gramophone Magazine and praised by the critics of The Strad, Diapason (5 diapasons), Classica (Coup de Cœur / 5 stars) among others.

Driven by the same passionate enthusiasm and desire to serve the most wide-ranging repertoire, Trio Zeliha regularly performs in prestigious venues such as the festivals of La Roque d’Anthéron, Radio France Montpellier, the Rencontres Musicales d’Évian, the Gstaad Musical Summits, the Folles journées de Nantes, the Rencontres de violoncelle de Bélaye and more. They were invited to perform at the Rainier III Auditorium in Monte-Carlo in November 2020 as part of the Monte-Carlo Philharmonic Orchestra’s chamber music series.

In April 2022 the trio made its debut with the Orchestre National des Pays de la Loire (ONPL) at the Easter Festival in Aix-en-Provence.

After having worked with Claire Désert and Trio Wanderer, they are currently in François Salque’s class in the Chamber Music Master’s at the CNSMD in Paris, as well as in Luc-Marie Aguéra’s class at the CRR in Paris. At the same time, they receive advice from great musical personalities such as Emmanuel Strosser, Lise Berthaud, Olivier Charlier, Hortense Cartier-Bresson or the Ebène and Modigliani quartets.

As a soloist, Manon has just finished an Artist/Perform Diploma (DAI) at the CNSMDP and is starting a Master-class Certificate (postgraduate) with Julia Fischer at the Hochschule of Munich; Jorge and Maxime are finishing their DAI at the CNSMDP and the latter is also studying at the Queen Elisabeth Chapel in Belgium, in the class of Gary Hoffman.

In 2022; the Trio Zeliha is in residence at the Music Chapel under the guidance of Corina Belcea, Miguel Da Silva and Jean-Claude Vanden Eynden.

The Trio benefits from a scholarship granted by Baron & Baroness Bertrand