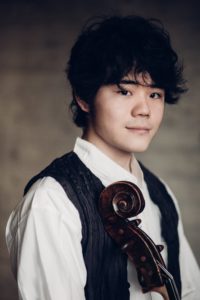 Born in Paraguay in 1995, Michiaki started his cello study at the age of five. In 2001 he moved to Barcelona where he studied with Iñaki Etxepare. After returning to Japan, he studied at the Toho Gakuen College Music Department, SD Course under the tutelage of Hakuro Mohri. Since 2015, he is pursuing his study at Robert Schumann Hochschule Düsseldorf with Pieter Wispelwey.

Michiaki has received awards such as the “Foundation for Youth Award” (2011), the “Honorable Award” (2015) from Iwatani Tokiko Foundation, and the “Aoyama Music Prize” (2017) as a promising rising star. He has been generously supported by the Japan Federation of Musicians, Rohm Music Foundation, Ezoe Memorial Recruit Foundation, and Dr. Sieghardt Rometsch Stiftung.

In September 21, Michiaki will be an artist-in-residence at the Queen Elisabeth Music Chapel under the guidance of Gary Hoffman and Jeroen Reuling.