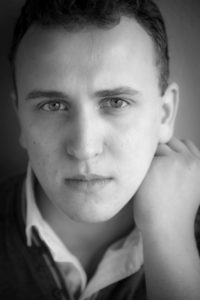 Born in Paris, the Franco-Polish baritone Matthieu Walendzik began his musical studies at the La Maîtrise Notre-Dame de Paris music school. In parallel with studies in musicology at the Sorbonne, he continued his training at the Conservatoire National Supérieur de Paris in the voice classes of Valérie Guillorit and the chamber music classes of Anne le Bozec from which he graduated with a master’s degree in 2020.

A member since 2018 of Opera Fuoco, he sings the roles of Count Almaviva (Le Nozze di Figaro), Riff (West Side Story), Russell (Lady in the Dark by Kurt Weill) as well as Pandolfe (Cendrillon) and Marcello (La Bohème).

He has performed in productions ranging from medieval music to contemporary works under the direction of conductors such as David Reiland, Stephan MacLeod, Christophe Rousset, Sigiswald Kuijken, Hervé Niquet and David Stern. He has performed, among others, Die Schöpfung, Johannes-Passion and Matthäus-Passion, as well as Bach Cantatas, Handel’s Messiah and much more.

Attached to his Polish roots, Matthieu Walendzik performs at concerts of music by Polish composers organized at the Polish Embassy in France and at charity events, for which he received the Young Personality of the Year award in 2019.

During the 2021–2022 season he sang the roles of Ormonte (Handel’s Partenope) under the direction of William Christie as part of the 10th edition of Le Jardin des Voix (Les Arts Florissants) of which he is a laureate, but also Count Almaviva (Le Nozze di Figaro), Dr. Falke (Die Fledermaus) and Marcello (La Bohème).

Since 2022, he’s an Artist in residence at the Music Chapel under the guidance of José van Dam and Sophie Koch.