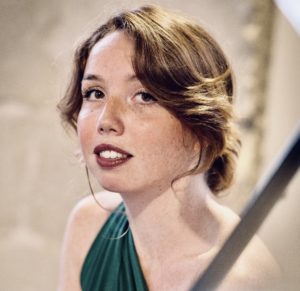 Marie-Juliette Ghazarian began her musical studies at the age of six and studied the harpsichord for more than twelve years.

She also took part in the Studio Lyrique of the Centre for Fine Arts in Charleroi from 2019 to 2021, studying the roles of Carmen, Dorabella and the Second Lady. She has performed at the Théâtre national de Bruxelles, the Opéra Royal de Wallonie and the Théâtre de l’Athénée in Paris with the role of Rickie in I Was Looking at the Ceiling and then I Saw the Sky by J. Adams. In 2018 she won the “Vocation Prize” of the Concours des Nouveaux Talents de l’Art Lyrique de Belgique and in 2019 the third prize of the BOT Competition.

In 2021 and 2022 she won the Heritage Prize of the Royal Conservatory of Brussels.

In September 2022 she is an Artist in residence at the Queen Elisabeth Music Chapel, where she studies under the guidance of José van Dam and Sophie Koch.