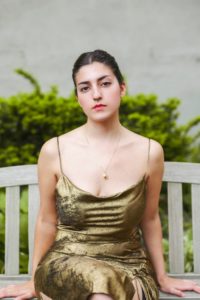 Lana has performed in all major halls in Sweden including Berwaldhallen, Konserthuset, Dunkers Kulturhus, Kulturhuset Ytterjärna and Kristinehallen in Falun. She gave her debut performance at Göteborg Konserthus at the age of eight and played her debut recital at Helsingborg Piano Festival at the age of twenty-one alongside Marc André-Hamelin and Haochen Zhang. She has played in renowned festivals such as Festival Internacional de Música de Esmeraldas in Quito, ICMF Stavanger, Musica Mundi Chamber Music Festival, PianoSummer at New Paltz, Art of the Piano Festival, Internationaal Kammarmuziek Festivaal Schiermonnikoog and From Easter to Ascension Festival in Tbilisi. She has also given recitals in France, Germany, Portugal, Norway, Ukraine and appeared in venues across the United States including Weill Recital Hall, Alice Tully Hall, Bargemusic and Jordan Hall.

Lana performed “Songs of Insurrection” by Frederic Rzewski for the composer at his 80th birthday celebration at Mannes in 2018 and recorded the world premiere of “…such words as it were vain to close…” for solo piano by J.K Randall on the New York label OpenSpace in 2019.

Born to Russian/Kurdish parents in 1992, Lana began her musical studies at the age of six with Victoria and Elena Power at Musikskolan Lilla Akademien in Stockholm. Lana moved to the United States at the age of sixteen to pursue studies with Hung Kuan Chen and Tema Blackstone at the Walnut School for the Arts. She holds degrees from New England Conservatory of Music and Mannes School of Music under the tutelage of Alexander Korsantia and Ursula Oppens.

She is currently Artist in Residence at the Queen Elisabeth Music Chapel in Brussels studying with Louis Lortie and Avedis Kouyoumdjian and pursuing her Solist Diplom at the Royal Danish Academy of Music with Jens Elvekjær.

Lana benefits from a scholarship granted by an anonymous donor