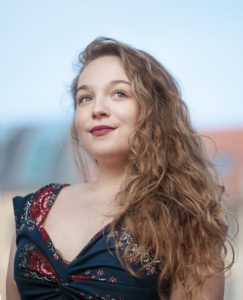 Mezzo-soprano Julie Nemer is studying for her Master’s degree at the Hochschule für Musik Hanns Eisler in Berlin, where she has been studying since 2015 with Christine Schäfer and Britta Schwarz.

In Berlin, she gives numerous concerts in various genres, including contemporary music programs at the Staatsoper unter den Linden – Werkstatt or numerous sacred works in prestigious Berlin churches and concert halls (Memorial Church, Konzerthaus…). In stage productions at the Hochschule, she performed the roles of Orlovsky (Fledermaus, J. Strauss) and Ruggiero (Alcina, Handel).

In duo with the pianist Marie France Giret, she participated in the program Générations jeunes interprètes, broadcast live from Berlin on France Musique on the occasion of the 30th anniversary of the fall of the Wall.

During masterclasses, she received advice from renowned artists such as Ludovic Tézier, Laurent Naouri, Jean-Philippe Lafont and Susan Manoff. The mezzo-soprano is a laureate of the 24th Louis Spohr International Competition 2018, of the 12th “Les Saisons de la Voix” Competition 2020, as well as of numerous academies: Royaumont, Les Frivolités Parisiennes, the International Baroque Academy of the Périgord Noir.

In 2021, she performed the role of Mercedes (Carmen Bizet) at the Junge Oper Weikersheim with the Jeunesses Musicales Deutschland.

Julie is also an artist in residence at the Queen Elisabeth Music Chapel since September 2021, under the tutelage of José van Dam and Sophie Koch.