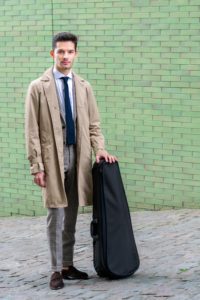 José Nunes is a Portuguese violist based in Amsterdam.

He finished his masters studies with distinction at the Conservatorium van Amsterdam with Nobuko Imai and Francien Schatborn in 2020. During the same period, he was an Academist of the Netherlands Philharmonic Orchestra and Netherlands Chamber Orchestra, and he held a scholarship of the Gulbenkian Foundation in Lisbon.

From September 2022, José is an artist in residence at the Queen Elisabeth Music Chapel, under the guidance of Miguel da Silva.

Currently, José is the violist of the ADAM quartet, which is part of the Netherlands String Quartet Academy. He is also a regular guest player in the Rotterdam Philharmonic Orchestra, Radio Filharmonisch Orkest, and is a member of Orquestra XXI. José also was a member of the European Union Youth Orchestra. José regularly performs in concert halls and venues across the Netherlands, and he recently appeared on Dutch national radio and television with the ADAM quartet.

José participated in numerous festivals such as the Festival Schiermonnikoog, Academia Isola Classica, Davos Festival, Moritzburg Festival, and Santander Festival. He had masterclasses under the guidance of distinguished professors like Ettore Causa, Antoine Tamestit, Veit Hertenstein and Tatjana Masurenko. As a chamber musician, José played and had coachings with several musicians such as the Michelangelo Quartet, the Juilliard Quartet, Jan Vogler, Christian Poltéra, Mi-Kyung Lee, Frans Helmerson, Plamena Mangova and Mihaela Martin.