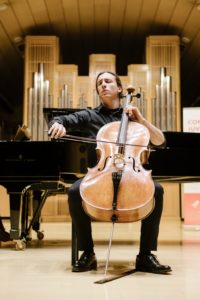 He began his cello studies at the age of four and has studied a Bachelor Degree in Violoncello Performance at the CSMIB in Spain. He graduated in June 2019 and received the Extraordinary End of Degree Award. From 2019 to May of 2021 he studied with Amit Peled at Peabody Institute of the Johns Hopkins University, Baltimore, MD. He graduated in May of 2021 and received the James Winship Lewis Memorial Prize in Performance “for his outstanding accomplishments and contributions to the musical and educational life at Peabody.”  During his time at Peabody Institute, he was granted with the “Excellence in Music Leadership Full Scholarship” from The Johns Hopkins University. Currently he is pursuing a Master’s Degree in Violoncello Performance at Koniklijk Conservatorium Brussel, Belgium, with Jeroen Reuling.

On September 2022 he will become an artist in residence at the prestigious Queen Elisabeth Music Chapel, where he will start a 3 year program in the class of Gary Hoffman. At the same time he will finish his Master’s Degree at KCB.

Throughout his career Jorge has taken part in several festivals, masterclasses and courses and has been awarded in many national and international competitions. He has performed as a soloist since 2015, the Haydn in C and D cello concertos and Dvorak. Some of the festivals he has participated in are the Schiermonnikoog Festival, the European Music Foundation Stringsfest Festival, the ¨Enrique Granados ¨ Festival, and since 2017 he is a guest artist at the Deia International Music Festival.