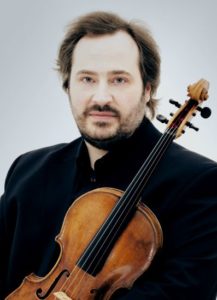 Violinist and violist Gregor Sigl received early instruction in music from his mother starting at the age of five and continued his musical education at the Albert Greiner Music School in Augsburg.

When only ten years old, he enrolled at the renowned Mozarteum Salzburg, in the class of Prof. Jürgen Geise. In the following years, Sigl won First and Second Prizes at Germany’s nationwide music competition “Jugend Musiziert”, receiving a commendation in the violin solo and string quartet categories.

In 1991 he was awarded a scholarship to study with American violinist Lynn Blakeslee at the Eastman School of Music in Rochester, New York.

In 1993 Sigl was accepted to the international masterclass of Latvian violinist Philippe Hirshhorn at the Utrecht Conservatory.

From 1997 to 1999 he completed his studies with violinists Arjen Beintema, Viktor Liberman, Herman Krebbers, Alexander Kerr and Charles André Linale.

As a member of the Berlin-based Artemis Quartet, Sigl performs at all the most important concert venues in Europe, the US, Japan, South America, Australia and at numerous international music festivals. The Artemis Quartet records exclusively for Erato.