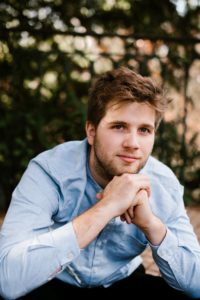 Thomas Ricart discovered singing at the Saint Louis de Gonzague choir school in Paris. Then, after his business studies at ESSEC, he joined the Conservatoire National de Musique et de Danse de Paris in 2016 to devote himself to music.

Laureate of the Royaumont Foundation in 2020, he joins the new class of the Opera Fuoco, an opera workshop directed by David Stern in 2021.
Last season, he sang the role of the Prologue in Britten’s The Turn of the Screw (conductor Alexander Brieger, staging Brigitte Jaques-Wajeman) in March 2021. Then he sang the roles of Alfredo in Verdi’s La Traviata with Music Opera.

In 2021-2022 Thomas continued to perform regularly in La Traviata. In December 2021 he made his debut at the Opéra Comique as Benvolio in Romeo and Juliet (conductor Laurent Campellone, staging Éric Ruf). He also performed the roles of Liberto, Soldato 2, Famigliare 2 and Tribuni in Monteverdi’s The Coronation of Poppea with the Académie de l’Opéra National de Paris (Conductor Vincent Dumestre, staging Alain Françon).

Thomas Ricart is also happy to devote himself to the chamber music repertoire, which he explores with the pianist Katia Weimann. They trained for three years with Anne Le Bozec. In August 2020, they took part in the France Musique Summer Festival in a programme of French melodies.

In 2022, he’s an Artist in residence at the Queen Elisabeth Music Chapel, under the direction of José van Dam and Sophie Koch.