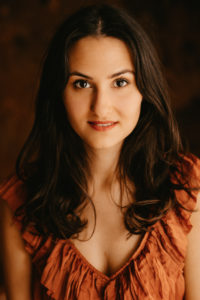 Clémence Garcia began her musical studies with the flute before turning to singing. She first entered the Toulouse Conservatory in opera singing and then the department of Baroque Arts of the Conservatoire à Rayonnement Régional.

She quickly took the stage with the roles of Lucy in The Telephone by Menotti (Opéra des Landes) and Gabrielle in La Vie Parisienne by Offenbach (Théâtre de Taverny). She also appeared as Barberine in The Marriage of Figaro, with the company Opéra Eclaté (Opéra de Massy, Opéra de Clermont-Ferrand, Festival Saint-Céré, Luxembourg, etc.), Frau Herz in Der Schauspieldirektor by Mozart, the Fire and the Princess in L’Enfant et les Sortilèges by Ravel as well as Euridice and Musica in L’Orfeo by Monteverdi, and Filia in Jephte by Carissimi.

In 2019 she sings the First Lady in Mozart’s The Magic Flute (Opéra de Tours) as well as the role of Love in Orphée et Eurydice by Glück (Opéra de Clermont-Ferrand).

Clémence was awarded the ‘Promising Young Artist’ prize at the Bordeaux-Médoc singing competition.

Her interest in the baroque repertoire led her to perfect her skills with such renowned artists as Philippe Jaroussky, Jérôme Corréas, Adrianna Fernandez and others. She is regularly asked to perform as a soloist in oratorios: St Matthew Passion, St John Passion and Mass in B by Bach (Halle aux Grains in Toulouse), Magnificat by Bach (Opéra de Massy), Stabat Mater by Pergolesi (Orquestra Barroca de Barcelona), Messiah by Handel, as well as the Mass in C minor by Mozart and the Missa in Angustiis by Haydn. She performed several solo roles in Le Triomphe des Arts, an opera-ballet by Dupuy, during its premiere and recording with the Ensemble Baroque de Toulouse.

She was solo soprano in Fauré’s Requiem with the Orchestre de l’Opéra de Massy and for the premiere and recording of Christopher Gibert’s Stabat Mater (Rocamadour Festival). She also played the lead role in the production of the opera L’Annonce faite à Marie by Marc Bleuse, performed at the Théâtre du Capitole de Toulouse.

Since 2022, she’s an Artist in residence at the Queen Elisabeth Music Chapel under the guidance of José van Dam and Sophie Koch.