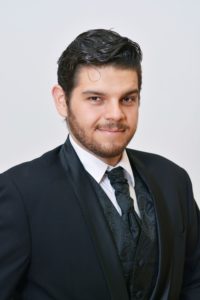 Originally from Jalisco, Mexico, he was a fellow of the Sinaloa Opera Workshop under the guidance of teachers Carlos Serrano and David Ramírez, during the third and fourth generation, and after that he continued his preparation at the SIVAM workshop.

He has participated in Gianni Schicchi productions in Zacatecas, Zapopan and on the esplanade of the Palacio de Bellas Artes, as well as in La fanciulla del West by Puccini at the Palacio de Bellas Artes. He sang the role of The Count in Mozart’s The Marriage of Figaro in the Talqná room in Xalapa, Veracruz under the musical direction of Lanfranco Marcelletti and in the Nazas theater in Torreón, Coahuila directed by Ramón Shade.

He recently participated in the Rossini Gala with the tenor Javier Camarena and in the Homage to the tenor Ramón Vargas at the Palace of Fine Arts, in addition to making his debut in the role of Figaro in Rossini’s Barber of Seville.

In addition, his European debut was at the Teatro de la Maeztranza in Seville, Spain, at the Role of Giorgio Germont in July 2022 he will make his debut with the Teatro Regio di Parma, in the role of Simon Boccanegra.

Since 2022, Carlos is an Artist in residence at the Music Chapel under the guidance of José van Dam and Sophie Koch.